In December, the ICC published a second draft of the plan and opened a formal docketed proceeding to solicit further comments and to adopt a final plan. The second draft maps candidate Renewable Energy Zones in Illinois where development opportunities exist and provides detail regarding regulatory and advocacy efforts the state can use to promote renewable energy development.

In the Fall, we wrote two posts about the ICC’s first draft of the plan, including methods for identifying “Renewable Energy Zones” and the draft plan’s assessment of processes and potential reforms of regional transmission organizations (RTO) that might help advance Illinois’ renewable energy goals. As with the prior draft, the second draft plan is wide-ranging. It reviews the status of renewable energy in the state, identifies barriers to new development, and recommends methods to facilitate the future expansion of renewables. In this post, we briefly summarize three topics addressed in the second draft pan: Renewable Energy Zones, RTO processes and reforms, and state and local land use requirements.

Using the criteria described in the first draft of the plan — including resource potential, zoning and permitting rules, and land use constraints — the second draft identifies seven candidate Renewable Energy Zones in the state: 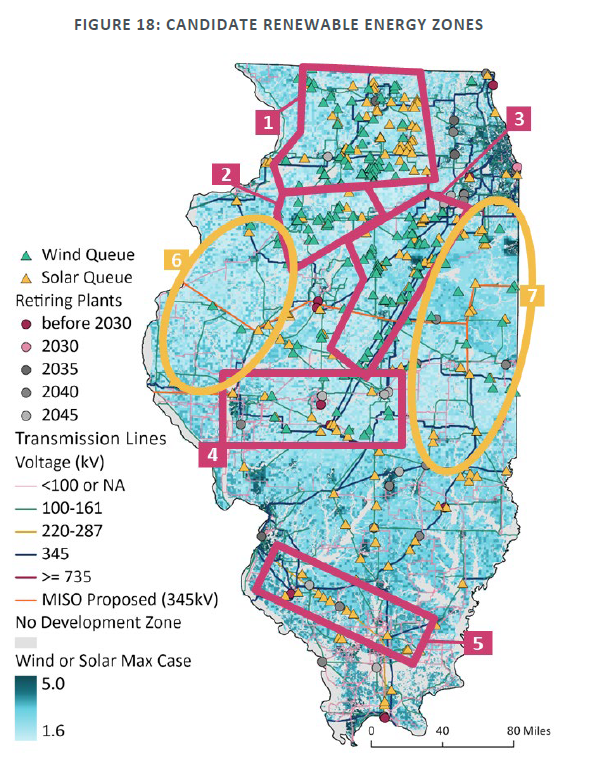 These Renewable Energy Zones are divided into two groups:

The second draft plan posits that these Renewable Energy Zones should be the focus of the ICC’s future studies and investigations, as well as its interactions with the RTOs that operate in Illinois (PJM and MISO), including the RTOs’ long-term transmission planning processes.

The second draft plan recommends that the ICC use a number of existing processes at PJM and MISO – or advocate for reform of those processes – to promote the state’s renewable energy goals and development in Renewable Energy Zones. These include reforms to allow the RTOs to better account for state policy goals when planning new transmission capacity and creating new regional markets for clean energy attributes. The second draft plan also suggests that the state consider employing PJM’s “State Agreement Approach” to directly sponsor a portfolio of transmission projects, but notes that legislative authorization may be required for such an approach.

The second draft plan also addresses land use requirements that impact renewable energy facilities development. First, the draft plan recommends that the ICC coordinate with other state agencies to develop a “model zoning ordinance” to recommend best practices for the siting and decommissioning of renewable energy facilities, which is currently done at the county or municipal level. While use of this model ordinance by local governments would be voluntary, the draft plan notes that it could serve as a useful starting point for counties that currently lack ordinances. Second, the draft recommends that the ICC, the Illinois Department of Agriculture (IDOA), and the Illinois General Assembly review whether changes should be made to the IDOA’s Agricultural Impact Mitigation Agreement requirements for renewable energy facilities. Many of these requirements, the second draft plan notes, can currently be modified via negotiation between landowners and developers,

The ICC will now accept comments on the second draft of the plan through a formal docketed proceeding to solicit comments and to adopt a final plan. While a schedule has not been established, ICC staff recommended that initial comments be submitted by March 31, 2023, and reply comments be submitted by April 28, 2023. The final schedule and procedures for the docket will likely be determined later this month.

Please contact a member of the firm’s Energy and Cleantech team if you have any questions about Illinois’ draft Renewable Energy Access plan or would like to participate in the ICC proceeding.