Partner
Ambassador Prosper is based in the firm’s Los Angeles office. 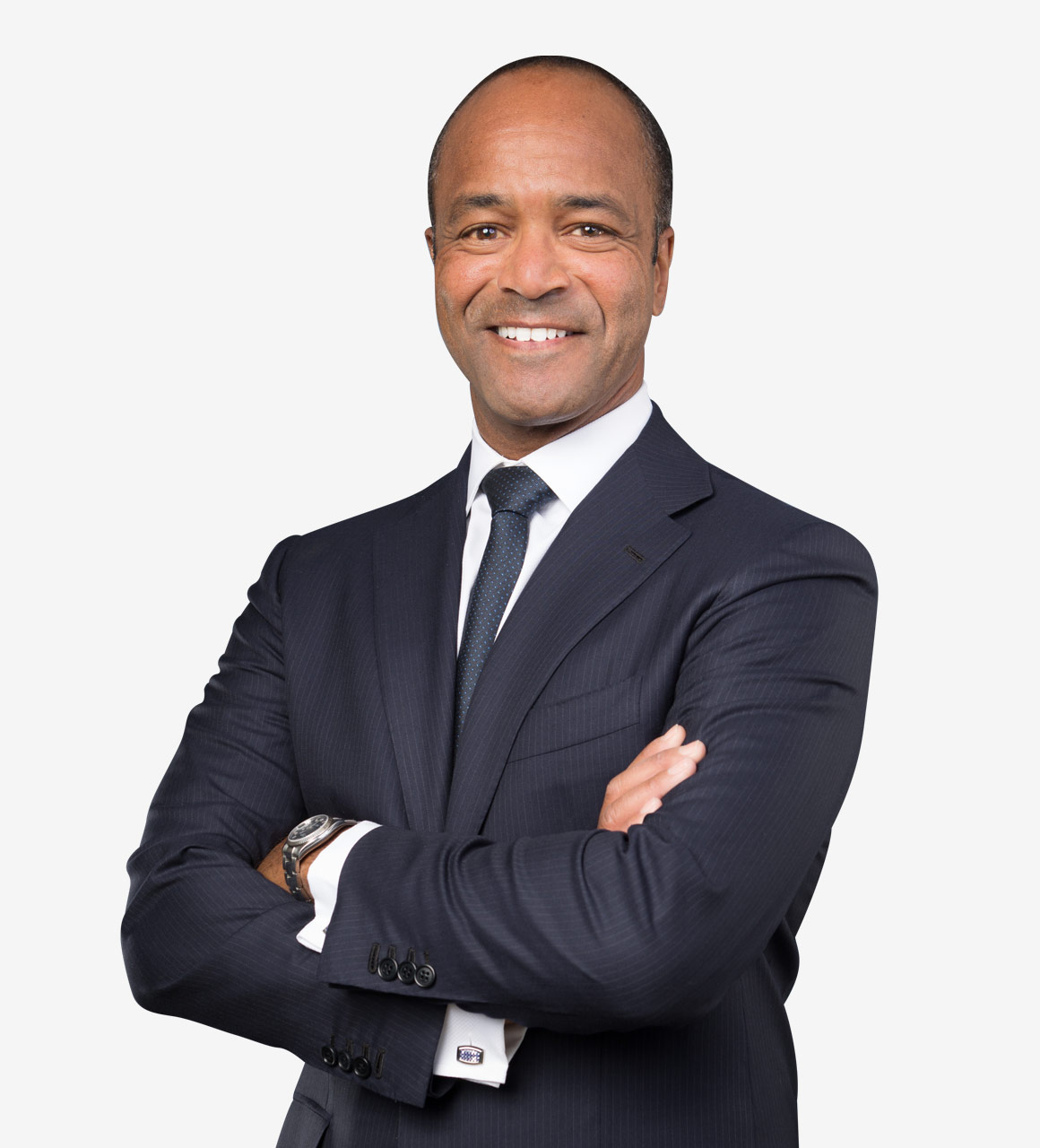 Ambassador Prosper is regularly called upon to handle complex and sensitive matters. Using his high-level diplomatic experience and legal skills, Ambassador Prosper advises company executives and assists clients in navigating complex political and regulatory landscapes of foreign markets; advises and assists developing countries on building and strengthening domestic institutional capacity in legal, commercial, and energy sector and infrastructure development; and leads arbitration teams before tribunals in complex international disputes. With his wide range of contacts throughout the world, he is able to open markets to clients, determine the feasibility of trade relationships and minimize legal and business risks. Ambassador Prosper has been appointed by the United States District Court to mediate complex legal and business disputes between parties and has investigated and recommended solutions on matters of public interest. He also advises numerous clients on matters relating to economic sanction and advises foreign governments on improving their legal capacity.

UN Committee on the Elimination of Racial Discrimination
Expert/Vice-Chair

From 2007-2012, Ambassador Prosper was one of 18 experts elected to serve on this committee where he participated in over 90 Committee reviews of States Parties’ implantation of the International Convention on the Elimination of All Forms of Racial Discrimination, including serving as the Rapporteur in several cases. He also represented the Committee on field mission to advise on the implementation of Convention in 2010. During the course of his service, Ambassador Prosper was elected by the committee to serve as its vice-chair, and he contributed to general recommendations 32, 33, and 34 adopted by the Committee and to three early action warnings.

US Department of State
US Ambassador-at-Large

Prior to joining ArentFox Schiff, Ambassador Prosper was the US Ambassador-at-Large in charge of the Secretary of State’s Office of War Crimes Issues. He was appointed in 2001 by President George W. Bush and, after being unanimously confirmed by the US Senate, served until October 2005.

As the President’s envoy and senior diplomat, Ambassador Prosper traveled worldwide conducting diplomatic negotiations and consultations with heads of state, foreign ministers, and senior government officials from over 60 different countries; formulated US policy responses to atrocities and conflicts throughout the world; was the chief negotiator and diplomat responsible for engaging nations regarding their nationals captured in combat; and engaged foreign parliaments and multilateral and international organizations to build support for US policies, among many other responsibilities. He also regularly visited conflict zones in efforts to secure peace, stability, and the rule of law, where in this capacity, Ambassador Prosper formulated and coordinated US policy responses to atrocities and attacks against civilians throughout the world. He reported directly to US Secretaries of State Colin Powell and Condoleezza Rice and advised the President of the United States, Secretary of Defense, Attorney General, National Security Advisor, Chairman of the Joint Chiefs of Staff, Director of the Central Intelligence Agency, White House Counsel and other senior US government officials. After September 11, 2001, Ambassador Prosper played a key role in developing policy to confront terrorism. He was also the chief US negotiator and lead diplomat responsible for engaging nations regarding their nationals held in Guantanamo Bay, Cuba and captured by US forces in combat.

From 1999 to 2001, Ambassador Prosper worked in the US State Department, Office of the Secretary of State, where he served as a special counsel and policy adviser on war crimes issues. He developed policy and assisted in formulating the US government response to serious violations of international human rights law and international humanitarian law committed in areas of conflict throughout the world. While holding this position, Ambassador Prosper traveled to affected areas in Europe, Africa and Asia to promote initiatives and build coalitions and engaged in negotiations. He was detailed from the US Department of Justice, where he served as Special Assistant to the Assistant Attorney General for the Criminal Division.

In 1999, Ambassador Prosper served as the Special Assistant to the Assistant Attorney General, where he assisted in the development of international justice initiatives.

From 1996 to late 1998, Ambassador Prosper was a war crimes prosecutor for the UN International Criminal Tribunal for Rwanda. While working and living in Rwanda for nearly three years in the aftermath of the genocide, he was appointed lead trial attorney and successfully prosecuted Prosecutor vs. Jean-Paul Akayesu, the first-ever case of genocide under the 1948 Genocide Convention. He won additional convictions for crimes against humanity and broke new ground in international law by convincing the UN Tribunal, for the first time, to recognize rape as an act of genocide and a crime against humanity. In this role, he also supervised investigations throughout Africa, Europe, and North America.

In 1995, Ambassador Prosper assessed the post-war Rwandan justice system and assisted in developing a US action plan. He also consulted and coordinated with Rwandan, United Nations, and donor country representatives.

US Department of Justice, Office of the United States Attorney
Assistant US Attorney

From 1994 to 1996, Ambassador Prosper was an Assistant United States Attorney for the Central District of California in Los Angeles assigned to the Narcotics Section, Drug Enforcement Task Force, where he prosecuted and supervised investigations of major international and national narcotics cartels and offenders for complex narcotics conspiracy, distribution offenses, and money laundering schemes.

Prior to becoming an Assistant US attorney, Ambassador Prosper was a Deputy District Attorney for Los Angeles, California from 1989 to 1994. His last two years in the DA’s Office were spent in the Hardcore Gang Division of the Bureau of Special Operations prosecuting solely gang-related homicides, special circumstance murder, murder, and manslaughter cases committed in the South Central, East and downtown Los Angeles area.

Ambassador Prosper remains engaged in matters of public interest. In September 2013, he became a member of the International Centre for Settlement of Investment Disputes (ICSID) Panel of Arbitrators and of Conciliators, where he is asked by disputing parties or by the ICSID to serve on conciliation commissions seeking to resolve international investment disputes commenced under the ICSID Convention or the ICSID Additional Facility Rules. In April 2008, he was appointed by President Bush to be a member of the US Holocaust Memorial Council, and he held that position until August, 2014. In April 2007, he led, on behalf of the International Republican Institute, a 59-person international election observation mission to Nigeria to observe the Presidential and National Assembly elections in that country. He has been a speaker for numerous organizations and universities. In addition, he was an ambassador-in-residence/adjunct professor at the University of Utah’s S.J. Quinney College of Law.

Ambassador Prosper’s work representing Reza Taghavi, who was released from an Iranian prison in 2010, and Amir Michael Hekmati, a former US marine who currently stands accused of spying in Iran for the United States, has been profiled in California Lawyer magazine.

Ambassador Prosper is the son of two physicians who emigrated from Haiti. He was born in Denver and raised in the state of New York. Ambassador Prosper speaks French and has a working knowledge of Italian and Spanish. He serves as a trustee on the Boston College Board of Trustees. He was a varsity lacrosse player at Boston College and continues to remain active in sports.