USD LIBOR Transition: Has the Moving Van Arrived Yet?

It is now official – the United Kingdom Financial Conduct Authority (UK FCA) recently confirmed that the use of US dollar LIBOR (London InterBank Offered Rate) will not be allowed in most new contracts in the New Year. According to the UK FCA, this announcement is supported by regulators in the United States and around the world.

On October 14th, the Alternative Reference Rates Committee (ARRC) recommended that all market participants act now to slow their use of USD LIBOR and leverage the next six weeks, through November 26th, to promote a smooth end to new LIBOR contracts by year-end.

ARRC believed that proactive reductions in new USD LIBOR contracts should apply across markets, and across the full range of derivatives and cash products.

As emphasized by the ARRC’s Chairman:

Let’s examine how this ‘smooth transition’ away from USD LIBOR has progressed during this 6-week period.

Based upon the following chart, rather than decreasing, corporate loan volume tied to USD LIBOR and tracked by Bloomberg (comprised primarily of syndicated and participated loans) actually increased by 103% from this 6-week period in 2020 versus the comparable period in 2021: 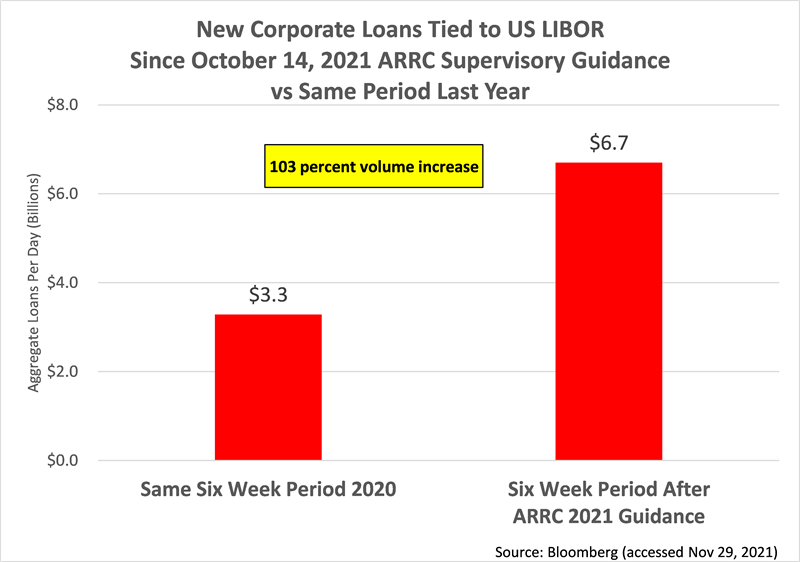 Interestingly, the average maturity of these new corporate loans increased from 4.9 years to 5.6 years.

This enables market participants to replace LIBOR with LIBOR for as long as possible.

Rather than decreasing, interest rate swap volume tied to 1-month USD LIBOR actually (i) increased by 87% between the period shortly after SOFR First's launch, and subsequent to, ARRC's October 14th recommendation that USD LIBOR use slow to assure smooth market functioning, as shown on the following chart, and (ii) increased by 47% between the 6-week period prior to, and subsequent to, ARRC's October 14th recommendation. 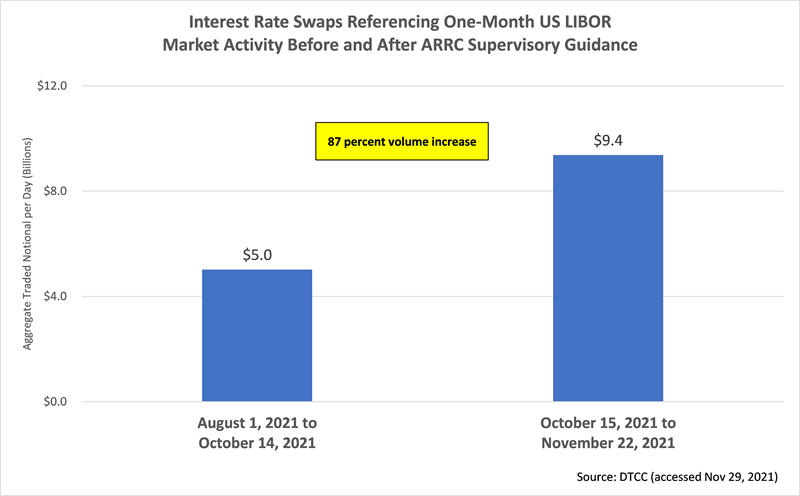 It should be noted that US regulators such as the Federal Reserve, the Federal Deposit Insurance Corporation (FDIC), the Office of the Comptroller of the Currency (OCC), and the Commodity Futures Trading Commission (CFTC) regulate banks and other regulated financial institutions. Consequently, the UK FCA’s announcement and US regulatory guidance do not directly apply to non-regulated entities in the shadow banking system, such as hedge funds.

As the UK FCA and US regulators admonish, everyone should act now to slow USD LIBOR use for the next four weeks through the year-end LIBOR/SOFR transition deadline.

[1] See ‘FCA confirms rules for legacy use of synthetic LIBOR rates and no new use of US dollar LIBOR’ published by the UK FCA on November 16, 2021.

[2] See ‘ARRC Recommends Acting Now to Slow USD LIBOR Use over the Next Six Weeks to be Well-Positioned to Meet Supervisory Guidance by Year-End,’ dated October 14, 2021.